Ever since the NFL announced in May 2013 that Houston would host Super Bowl LI, the clock began ticking on a long list of capital projects. An estimated $1.5 billion was invested in Houston’s downtown entertainment district alone, plus additional spending around NRG Park and Hobby Airport. Beyond serving as the hub for Super Bowl festivities, the area around the George R. Brown Convention Center is now the new front door to welcome visitors and potential investors to a transformed Space City. 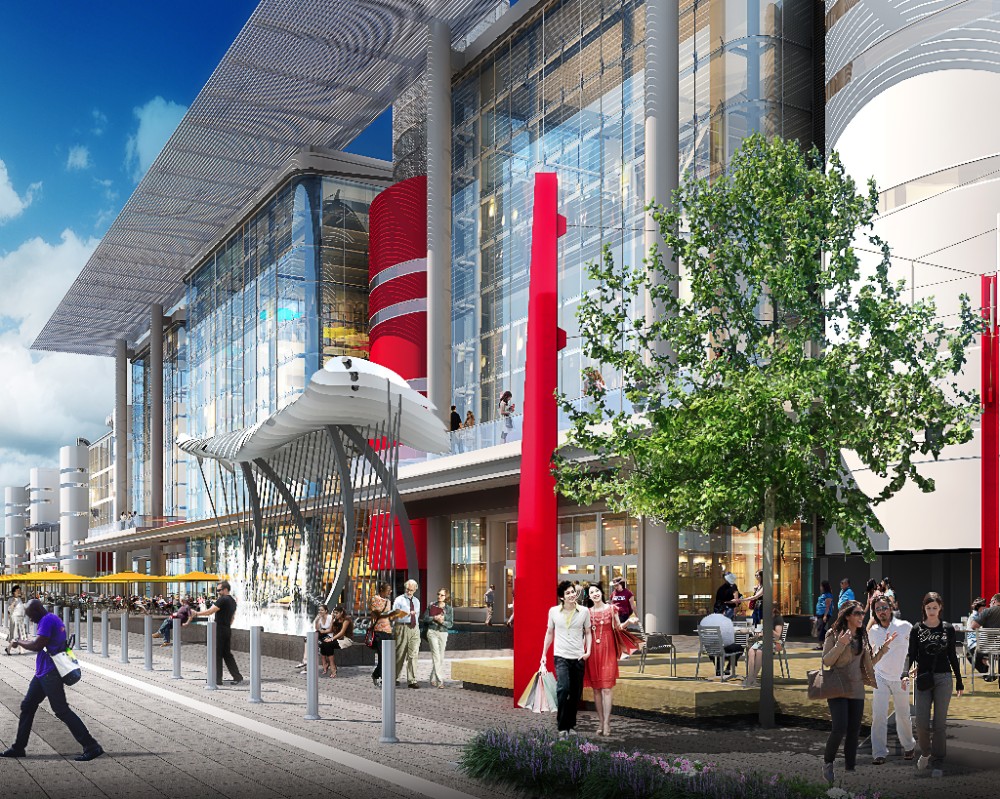 Houston First Corporation tasked PRISM with developing detailed renderings to show the vibrant new scene on Avenida Houston, in front of the GRB. We worked with Kirksey to generate multiple views of the new Partnership Tower, home to the Greater Houston Partnership, Houston First Corporation, and the Greater Houston Convention & Visitors Bureau. CoreNet Houston recently hosted tours of both projects, to showcase their integral role to position Houston as a growing economic and tourism center. Peter McStravick from Houston First Corporation and Lilyanne McClean from GHP discussed each building’s role in their respective organizations. The 9th floor outdoor terrace at Partnership Tower provides sweeping views of Discovery Green and the fabulous new dining options at GRB’s “restaurant row.” GHP leaders say this is the best way to present all Houston has to offer when investors visit

Despite the recent Forbes headline, retail is not dead. In fact, reports from the ICSC RECon convention last month are generally positive. One common theme? Retail must evolve.  “Retail is not struggling. Instead, it is being revolutionized,” is the comment from NAI. “People are spending more money on experiences on all retail fronts,” reports Simon CRE. And “Rather than just shop, malls will soon become a place to eat and be entertained,” according to Cushman & Wakefield.

Two Houston developers asked PRISM to showcase their new projects through several renderings to be displayed at ICSC RECon. In Fulshear, TX, the fastest growing city in the U.S. with population less than 100,000, Fulshear Real Estate Partners is developing a new mixed use project that was unveiled at RECon. General partner George Lane said this of the rendering (featured at the top of this newsletter):

“PRISM has a talent beyond compare and unlike any we have ever experienced. Candidly we really don’t know how they do it, but the rendering looks and feels like it’s already been built and it literally takes our breathe away. When presenting PRISM’s work to a prospective tenant, they not only see their building space but are able to experience the entire lifestyle of the overall development. Jing and her team are amazing!”

In another growing area, New Caney, Criss Cross Commercial Group is filling the need for a power center with their new Caney Crossing project, also unveiled at RECon.

“Prism’s renderings brought amazing clarity to our development, which finally allowed brokers and tenants to easily understand locations, access and exposure of the properties we are marketing. Of course, Prism’s work is beautiful, and adds a dramatic level of professionalism to our marketing efforts. And Prism was head-spinningly fast in producing the renderings. But most importantly, the business value of their work exceeded our highest expectations. They paid for themselves within days. Our only regret is not hiring PRISM sooner,” according to Executive Director Ryan Dennard.

The weather cleared just in time for the 31st Annual Houston AIA Sandcastle Competition. Smurfs reigned supreme, edging out the Crawfish. Congratulations to our many clients (names italicized below) who took home awards (and bragging rights.) Be sure to check out these amazing sand sculptures!